We were honored when we got the call from Norman Vaughan in 1996 to help him out with overboots for his historic climb of Mount Vaughan in Antarctica.  Norman was part of the historic Admiral Richard E. Byrd expeditions to Antarctica in 1929.  This peak was named for him, and at 89 years old he successfully summited it with his wife Carolyn and a dedicated group of support climbers.  Shown below are a few pictures and memorabilia from this incredible mountaineering milestone.

On the back of signed card, he included the message that he composed and read at the top of Mount Vaughan, Antarctica on December 16, 1996:

“By climbing this mountain for my 89th birthday I dared to fail and met success.  I have fulfilled a 65 year old dream.  I am grateful to the people who have put me here.  I never could have gotten here without Carolyn my wife, especially, who I am proud to say is standing beside me here now celebrating this moment.  To my sponsors, to Vern Tejas and the Mount Vaughan Antarctic team here and at home, to all the volunteers and supporters, to friends world-wide, and most importantly to my family. I am now ready for my next challenge. A message I wish to bring to everyone is to dream big and ‘dare to fail’.”

This climb has been in tribute to Admiral Richard E. Byrd, Dr. Laurence McKinley Gould, and to my two good friends Edward E. Goodale and Freddy Crockett who drove dogs with me here in the Antarctic.  Standing here on top of Mount Vaughan we can see Mount Goodale to the north and Mount Crockett to the south.  In 1929 we saw these mountains and glaciers for the first time.

This climb is also in tribute to the tenacious spirit of the Antarctic sled dogs who never gave up.  They have been my inspiration.  Our dogs couldn’t come this year.  But Zippy is here to pay tribute to the end of the era of the sled dog in the Antarctic as set forth in the new protocol of the Antarctic treaty.  Zippy (our stuffed toy husky) also commemorates the four dogs who wandered off after the crash of our DC6 lat year-Sticker, Magoo, Pudge, and Pandy.

I will miss the dogs of the Antarctic.  Good-bye you wonderful huskies.  May your memory live forever in our hearts.  You always did what was asked of you no matter how tough it was and often sacrificed your lives for man’s quest at the bottom of the world.  I salute you an I toast a new era of world-wide scientific cooperation for the next 50 years here in the Antarctic.  May it always stay pristine and become the “World’s Greatest Park”  ”  Signed:  Norman Vaughan. 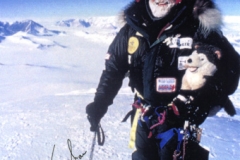 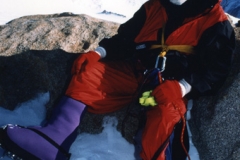 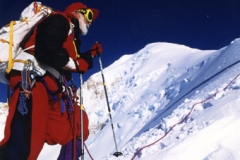 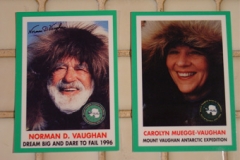 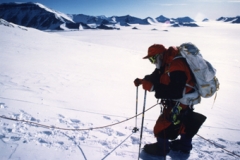 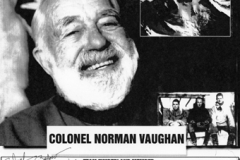